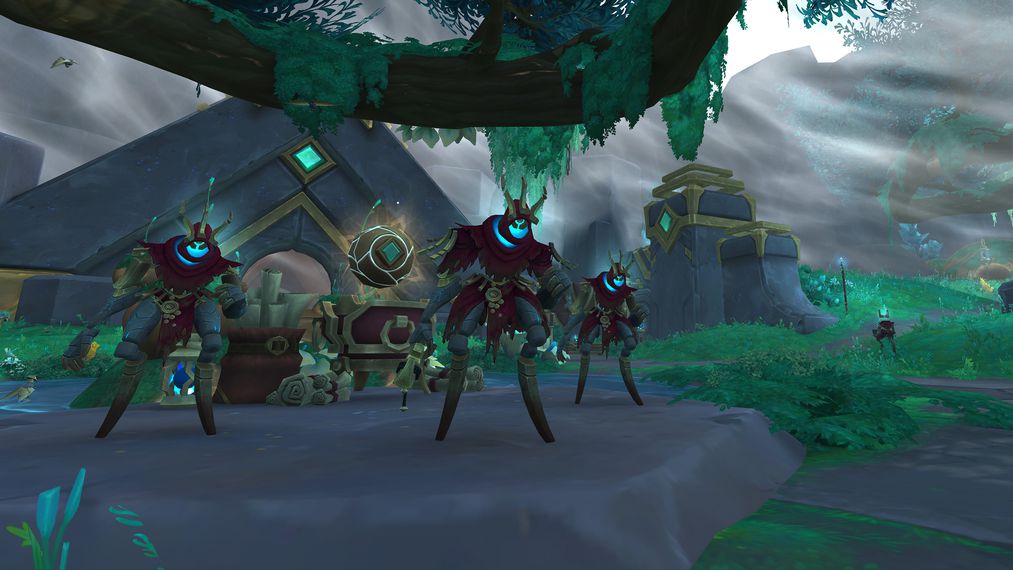 Zovaal, the elusive Jailer and ruler of the Maw in the Shadowlands, has made his next move—and with it, he threatens to rewrite the rules of reality. In Eternity's End, you'll face him, and perhaps save Azeroth and the Shadowlands from a fate worse than death. Eternity's End features include: NEW ZONE: ZERETH MORTIS Zereth Mortis was created by the First Ones as a workshop to create afterlives. Its denizens—the automa—have built all that exists in the Shadowlands. It is a strange, otherworldly location that defies all concepts of reality or physics. The Jailer intends to use the secrets of Zereth Mortis to reshape reality and bend it to his malevolent will. MEET THE ENLIGHTENED The Enlightened are brokers that arrived on Zereth Mortis a long time ago. They no longer see their world in a transactional manner, but instead they treat their dwelling as a sacred place, and hope to answer to a higher calling—the pursuit of knowledge. Find common ground with The Enlightened to succeed and defend Zereth Mortis. DECODE THE CYPHER OF THE FIRST ONES The automa of Zereth Mortis speak in a musical language that is incomprehensible to mortal races. Team up with a curious automa sidekick in this new progression system to learn the lost language of the Progenitors and delve deeper into the secrets of Zereth Mortis, unlocking an array of new zone activities, daily quests, events, and rewards. NEW RAID: SEPULCHER OF THE FIRST ONES Deep in the Sepulcher of the First Ones lies the key to unlock the Jailer's plans. Gather the power of the First Ones as you pursue Zovaal into the Sepulcher and fight through his forces—but first, you must face Anduin, and discover a way to resist the Jailer's terrifying Domination magic. CLASS TIER SETS RETURN Harness the power of the First Ones by collecting distinctive class armor sets via raids, PvP, or Mythic+ dungeons. Each set comes with powerful 2- and 4-piece set bonuses that complement your unique abilities. Other features in Eternity's End Mythic+ and PvP Season 3 Tazavesh added to the Mythic Keystone Dungeon rotation Note: Tazavesh will be split into two separate dungeons for Seasonal content. New Mounts and Pets Updates to Professions and Conduits New dancing mini-game at the Darkmoon Faire And much more! Source: worldofwarcraft.com